They can be a pain, a curse, a drag, the bane of a parent's life! In general, I like to play, prep and cook good food but the moment you do it through the perspective of a kid (picky or not), you just face a whole new world of challenges. That challenge gets bigger when you feel like a zombie at the crack of dawn, looking at the clock and trying to make that food to go on time. If you want your kid to eat it, it has to taste good and travel well. It can't look gross, oxidate, get bruised or leak by the time they eat it. It can't be boring but it can't be too new, or weird or touch other ingredients that would take the crispness away or make things wet. It can't shed crumbs on other items (apparently it's too hard to remove one from a carrot stick) and it shouldn't sweat (the cheese has been challenging). Of course that's all before you add your own requirements: It has to be reasonably healthy, include some variety, be safe to eat after it sat in a warm school for hours and most of all, it has to be affordable to repeat the same old routine 5 days a week, 4 weeks a month, 10 months a year… Multiply that by the number of kids you have to feed... Omg, am I really making 400 lunches a year!?? Okay, minus the holidays, PD days... Maybe 340. I need for someone to correct me on this. Oh and how could I forget the school's own demands: To be nut free and to include a "healthy" non sugary snack for the morning. As a parent, I can live with that one but sometimes all I want to do is slap a PBJ sandwich together and call it a day!

Whoever beams about enjoying making them everyday is full of it!! That or they just started and are being idealistic newbies that will wake up soon enough. Or they're just not the kind of person I can relate to. Ok I'm being a bit harsh and ranting. I'm just struggling and venting. What I really want to talk about is Wiener Winks! It's where this whole frustration led me. When I looked through an online list of lunch ideas, someone mentioned those two funny words and I heard myself say: "Wiener Whaaat?" Not only I felt and sounded like this guy on the right (he and the movie Jaws gets quoted way too often in this house) but I honestly had to look it up.

I was baffled! I had no idea that such a concept officially existed. I mean I had a wiener in a slice of bread before when running out of buns or when feeling depressed (extra yummy when fried in bacon fat if really depressed). You know, the kind of food that says "I know you're hungry and you don't give a fuck right now but it's okay. Things will turn out. So go ahead, eat me! Tomorrow is another day." In my world (or in the dark side of my mind), hotdogs in a slice of bread say that to me. They said that a lot. Followed by shame. So the fact that it has an official happy sounding name and that it's easy to find on Google really, REALLY surprised me! I got curious then figured the girls would get a kick out of it so yesterday I made some. The twist with mine is that I used cocktail wieners.

Why? Well, when the weather gets cold or after the first snow, we enjoy fires in our wood stove and when the fire mellows down, sometimes we roast marshmallows with the girls. The last time we did, someone mentioned that it would be fun to do the same with hotdogs so I made a mental note of it. Long story short, when I went to the store to buy some, I was looking for regular sized hotdogs but there were cocktail versions on sale. Practical me thought it would be easier and faster to roast in our wood stove and lets face it, mini food is just cute! I knew the girls wouldn't resist. I thought it would be a fun thing to do around the holidays. It seemed like a good idea at the time and I stored two packs in the freezer and kept it secret. Then I totally forgot about it! That's pretty much it. 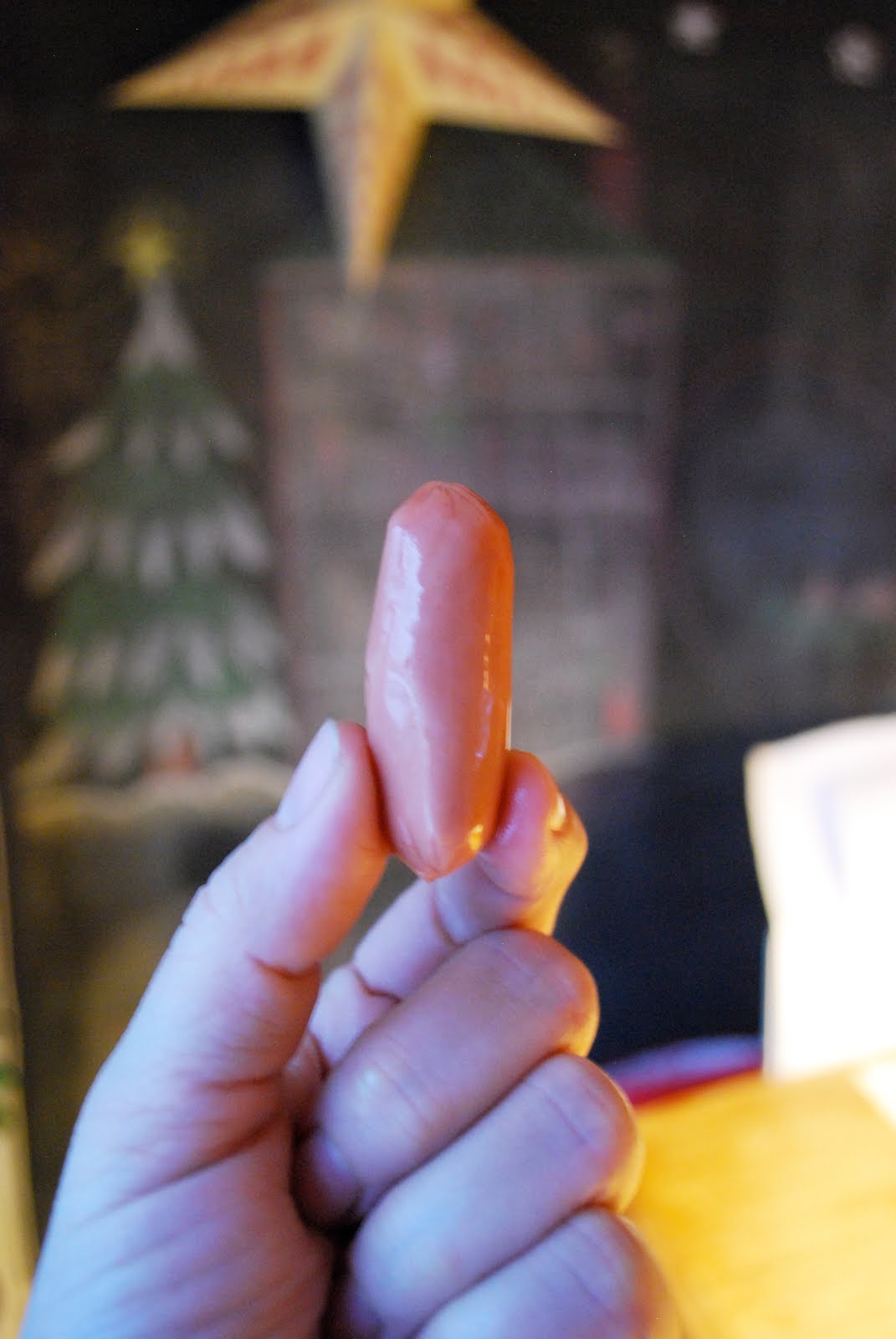 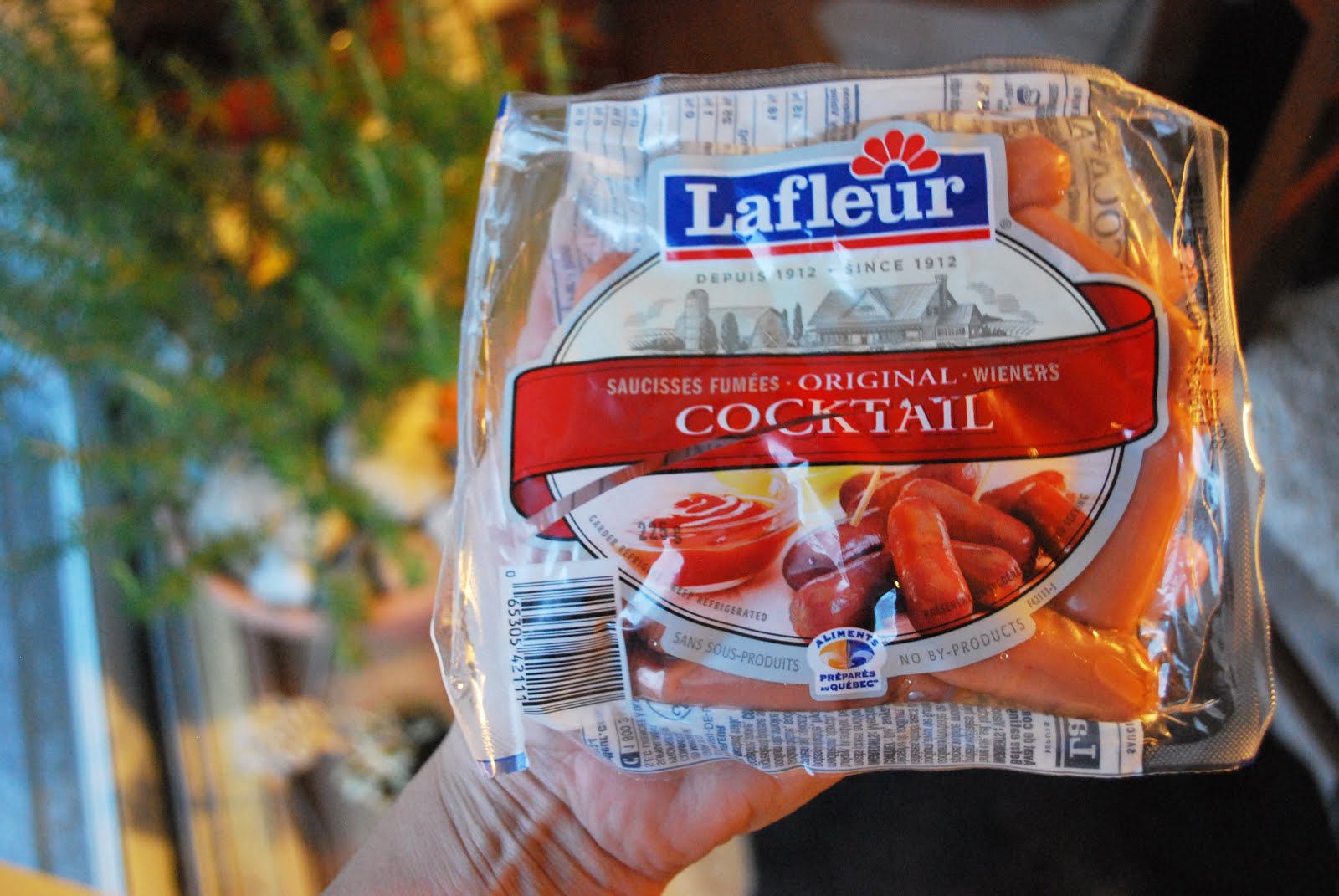 I must have felt a bit guilty though. You know, for puttering over cheap sandwich bread and cocktail wieners for dinner because as I went through the process, I found myself humming a song from Fred Eaglesmith called White Trash. It's a silly song (the lyrics are here if you're curious). I have nothing against Fred Eaglesmith (or Johnny Cash who gets mentioned in the song). They both tell great stories in songs and ballads and that one just happens to pop in my head whenever I give up on being classy which is more often than I'm willing to admit. 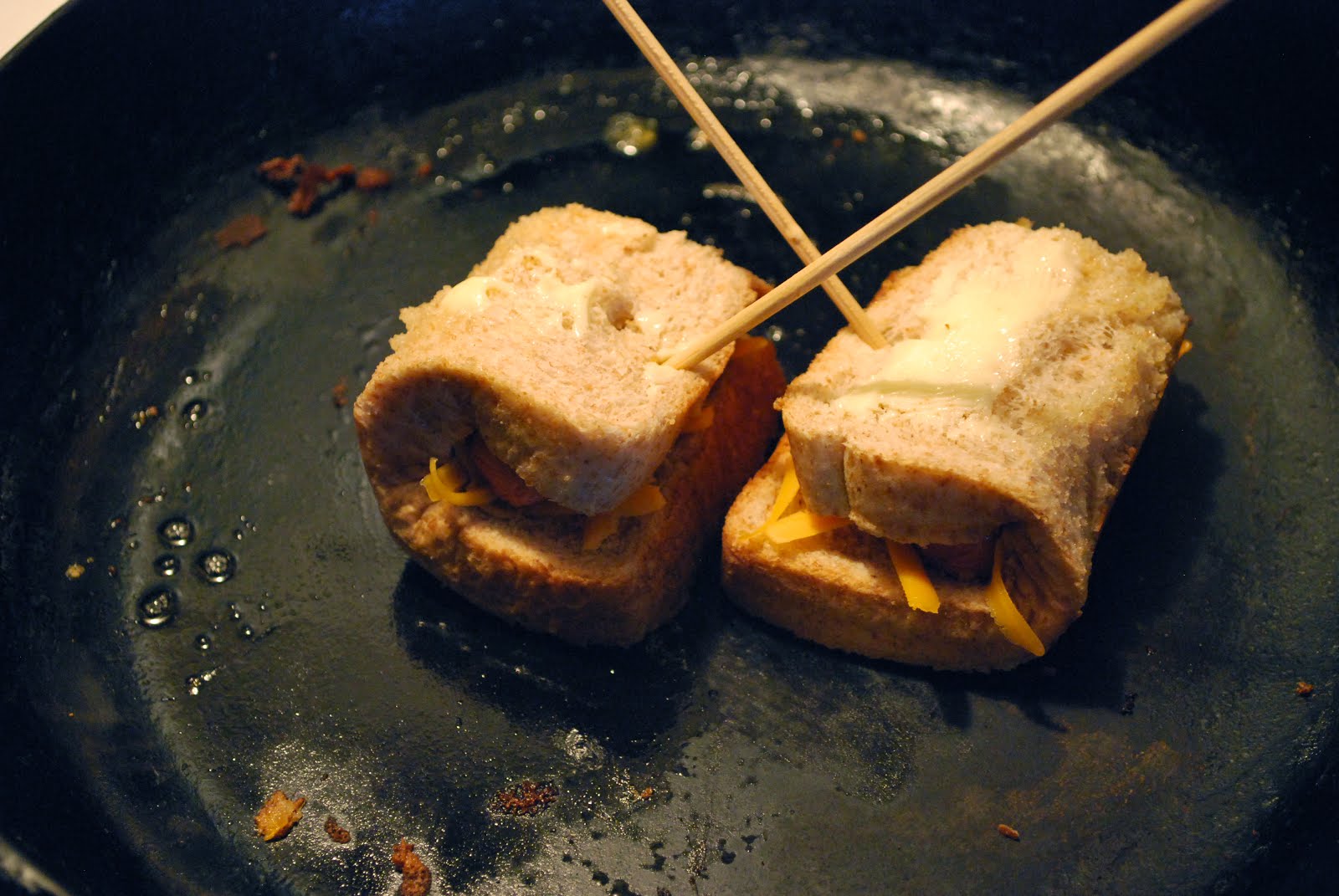 Okay so I'm the girl who never heard of wiener winks before and now that I tried some and show you my take, you realize that this looks nothing like what you expected or saw elsewhere online. I'm just full of it and crazy. I tried to do the classic way but the sneaky little cocktail wieners kept slipping out, it was not fun. Plus I was getting away from why I bought them in the first place. Mini food! I had to change the technique with the bread a bit. I cut each slice in half. I knew it would change the look but nobody cared and I was working with what I had. I also decided to do it in my cast iron pan for better control and as you can see we are out of toothpicks too! Bamboo skewers to the rescue! :)

I should mention that in our house it's rare to find processed sliced cheese which seems to be the standard choice for wiener winks. I'm always surprised at how expensive it is for what you get! The truth is, I wasn't raised on it so it's not something I would usually buy. If we're going to spend on cheese we go for medium or strong cheddar. It's common enough to be found at the pharmacy with eggs and bread on a milk run. We prefer white cheddar but sometimes the only option is orange (what I used in this picture). In this case, I grated the cheese for easy melting. Not a lot is required. About 4-5 good swipes of the brick of cheese on the grater seemed enough for one slice of bread. 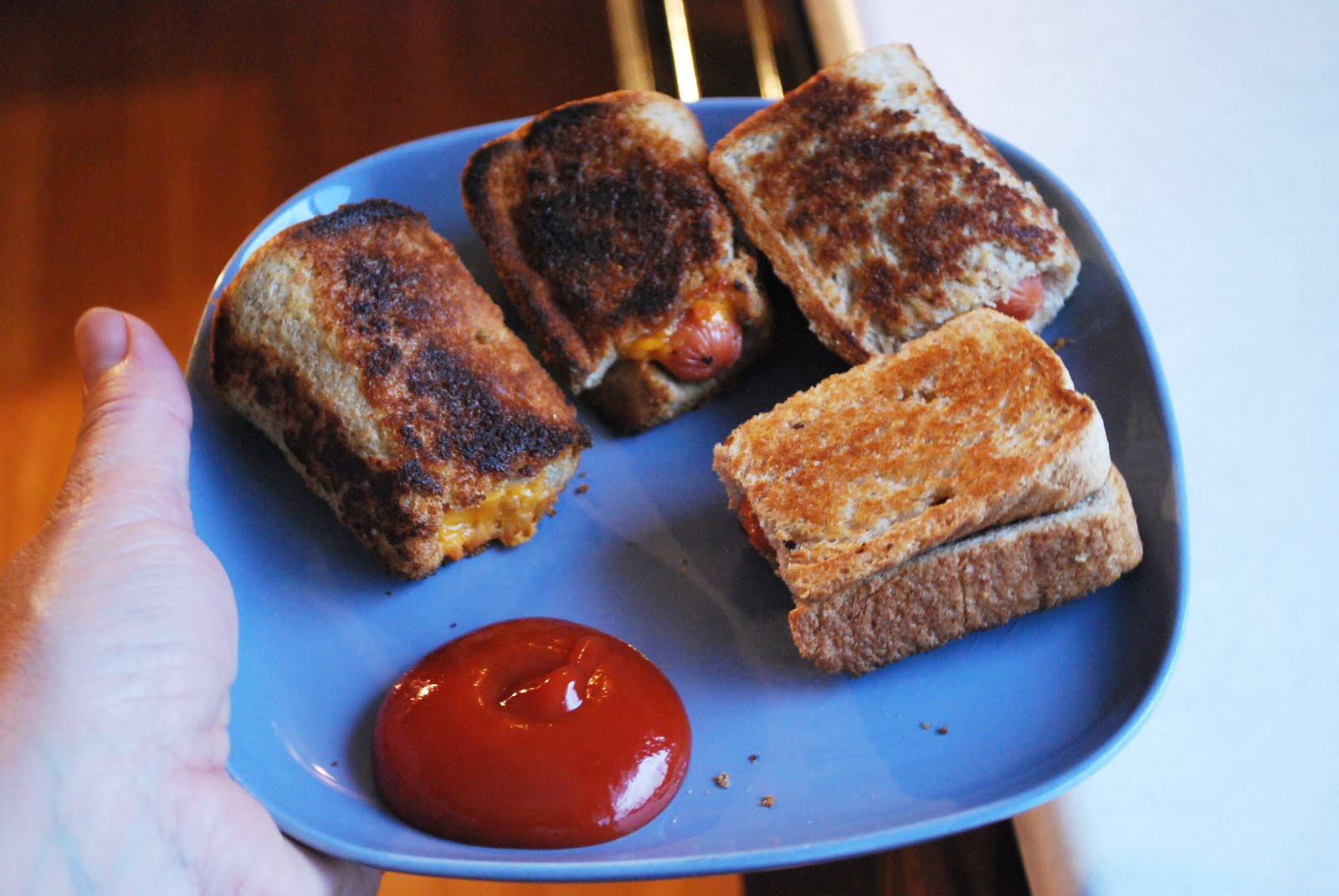 I'm sadly aware that some look burnt here, but they still tasted great! Unfortunately it's the only pictures I have. By the time I made the next batch of golden perfection, I couldn't bother to take more pics. I was busy with real life, eating and serving. Maybe next time. 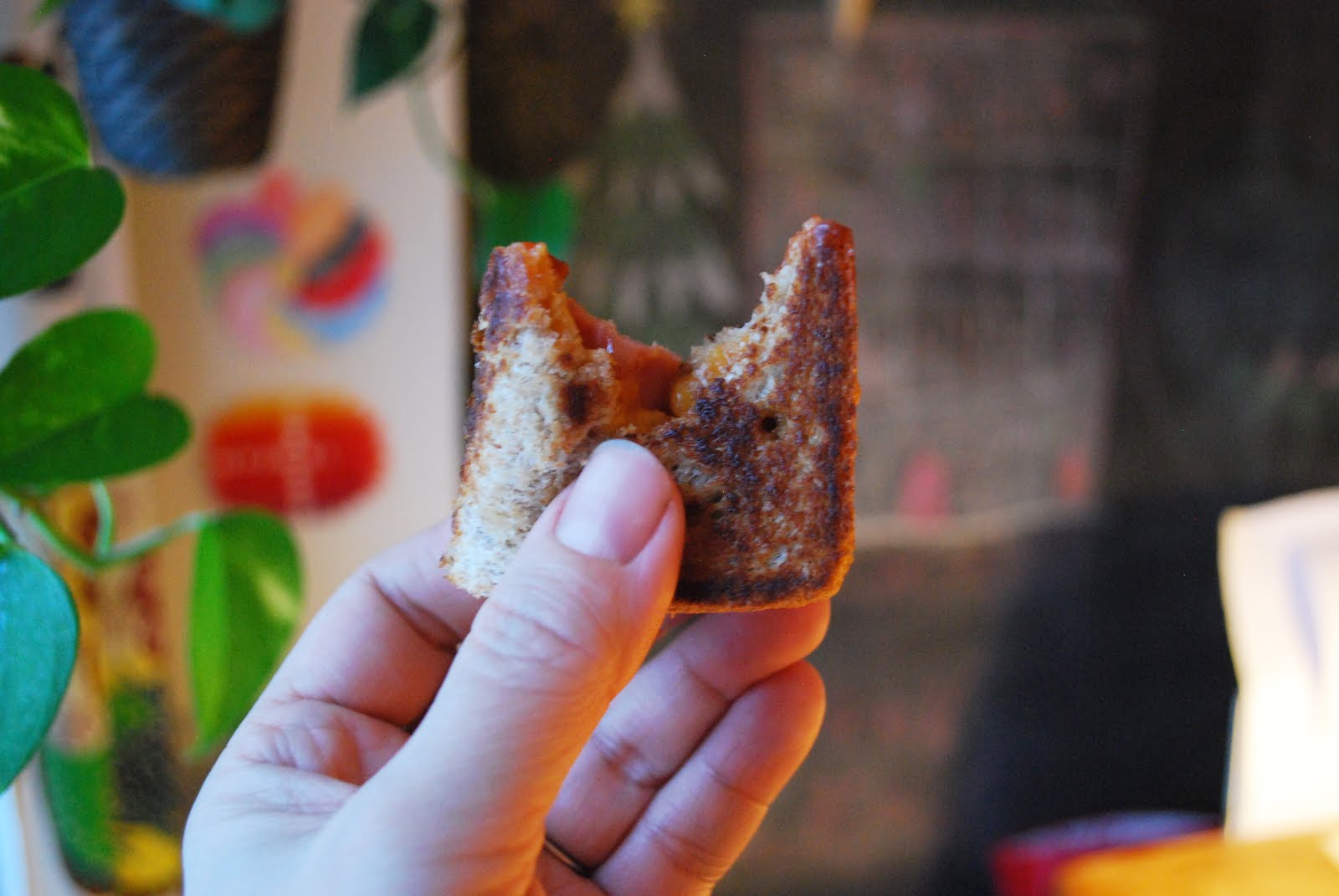 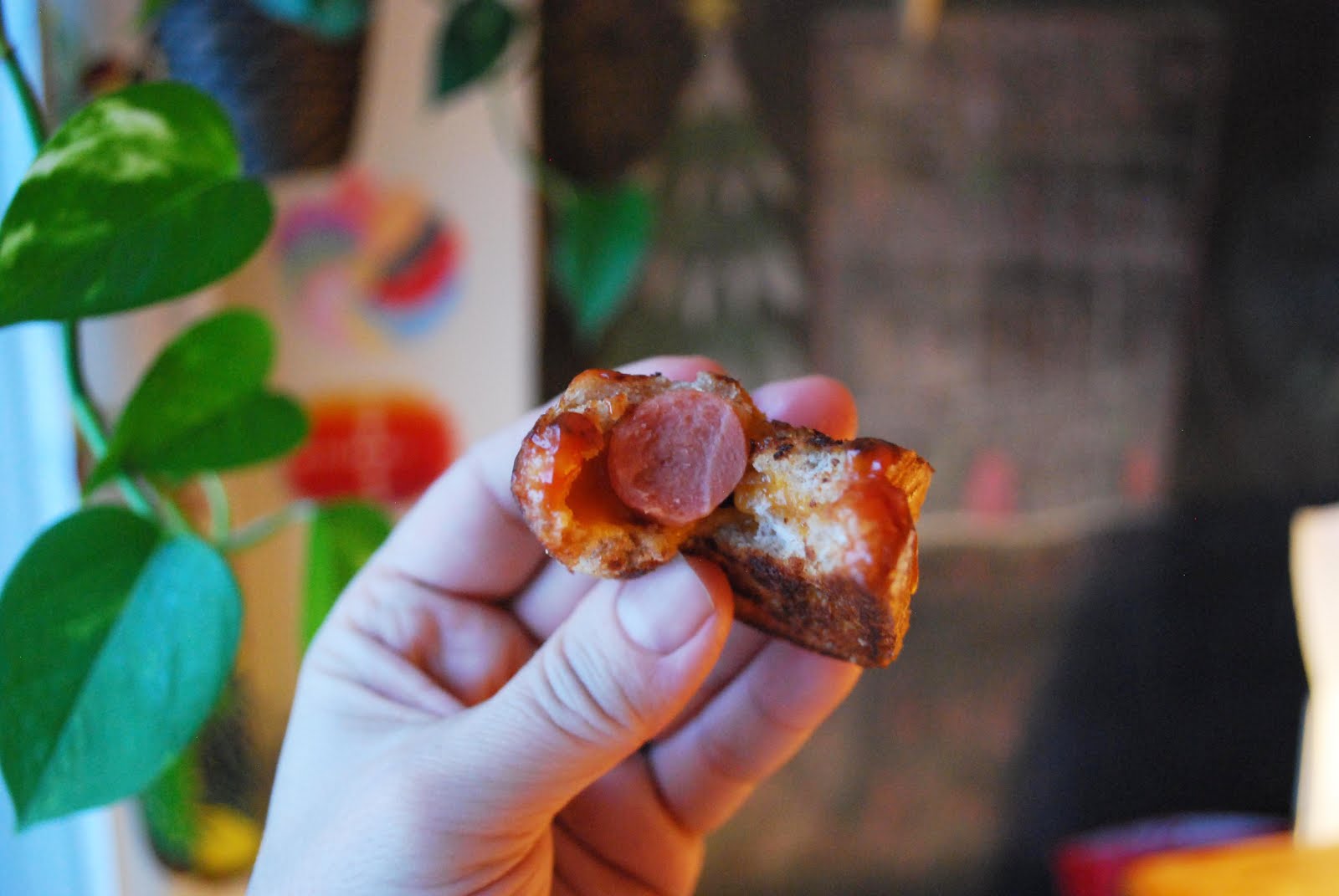 Apparently I'm a DORK for taking pictures of my half eaten wiener wink but he still loves me!

I can't share a recipe for this but I can describe what I did. I simply spread butter on one side of the bread (whole wheat was all we had and kids didn't mind) then I cut it in half. I flipped the 2 pieces of bread over (it greased the counter a bit but I didn't care). I sprinkled a bit of cheese over the two pieces (about 4 swipes on the grater) and placed a little wiener on each piece of bread before folding them over. I had no toothpicks to keep them together but long bamboo skewers did the trick. I didn't even bother to cut them. I placed two a time in the hot pan (on medium heat). It was an experiment so I wasn't confident to do more on the first try. As they cooked I made more. Once it was golden on one side, I would pull out the bamboo skewers, turn the wiener winks over and stab them again with the skewers just long enough to hold the bread in place till it would get golden and crispy. It didn't take long for them to be ready. It sounds complicated but it really wasn't.

The girls and I enjoyed these. It was tasty and fun! A little goes a long way. I guess they're like a cross between a grilled cheese and a hotdog but we actually found that they tasted like pogos. Is that weird? Especially when dipped in ketchup (because in this house, we might be doing it wrong but we like to dip pogos in ketchup). They both ate 4 and polished their plates with a big glass of milk and half an apple. I was relieved and they were satisfied.

Now I have a million questions. How many people actually knew this existed? Pigs in a blanket don't count. Is it an American thing or do Canadians eat it too? French Canadians? How does one pack it up to school? Did people really eat that at school often? How does it stay warm without being steamy? Or do kids eat it cold? Would it be safe sitting there for 3-4 hours before consumption? Living in Québec, our schools are overheated for 3/4 of the year so I'm not sure. I need answers because my girls did ask to try them for school lunch. My youngest had pizza day today (a freaking blissful break) but she's not the picky one. Guess what the other one brought to school though? ;) Fingers crossed!!

Have a marvelous, school lunch FREE weekend!!
Posted by Unknown at 9:53 am

So it's that time of the year again. 6 days ago we were on the ball (yay) and pulled out the old wooden advent calendar to fill up. Ha! ... 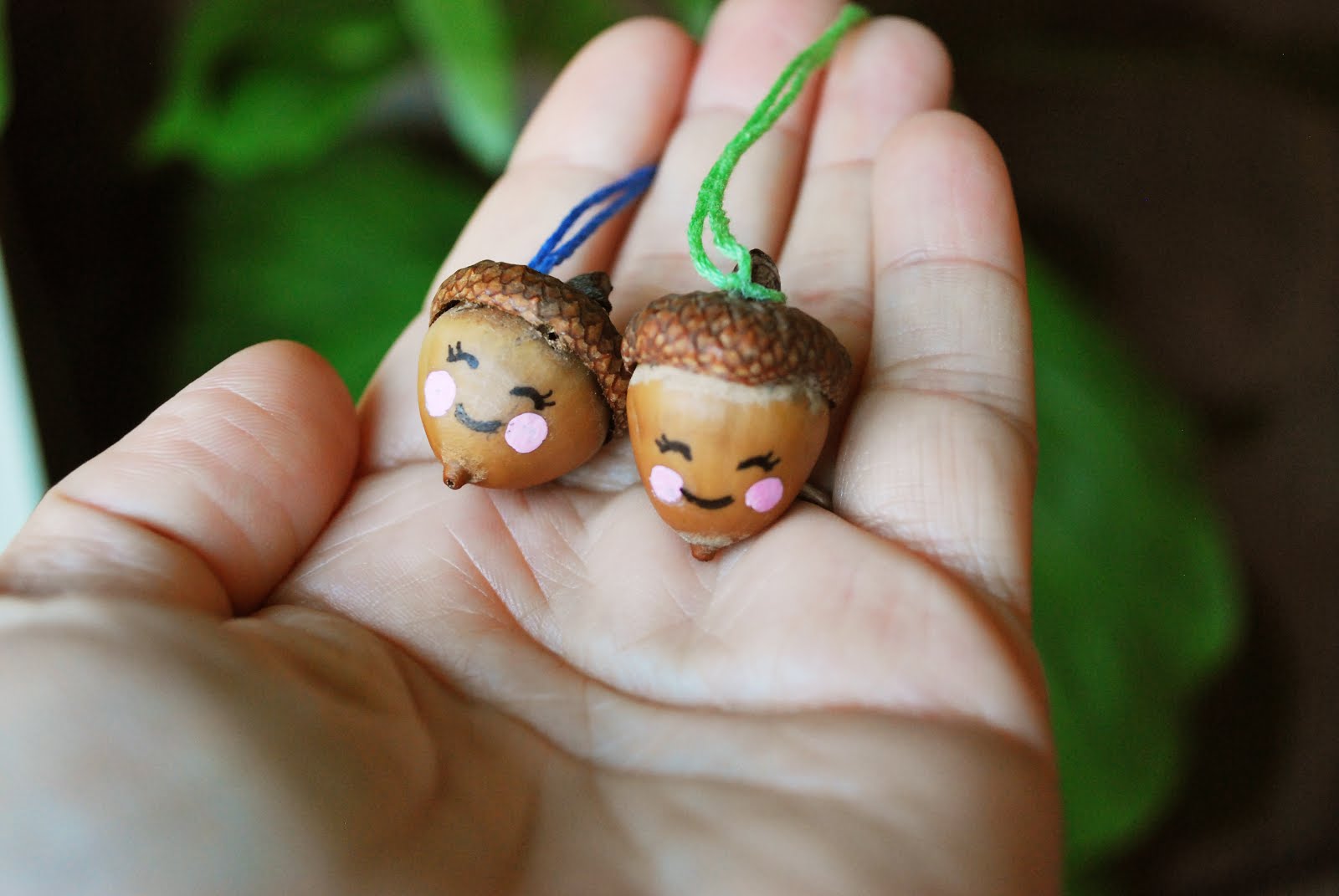 A little about Me

The links I love